“CrossFit to me is almost like surviving cancer” #PushYourLimits

“People make a big deal about the past. I don’t look at it that way; I look at it as every day is a new day… “ – I was listening to the words of a marathon runner, a leukemia survivor, who have also dealt with other hardships thrown his way, and who has let himself be inspired by others, landing on CrossFit as a new passion. Paulo Almas, a Wynn Fitness member at our North York club, was explaining to me the importance of “now,” doing it today, this moment, because this moment is all we own.

He certainly makes the most of it.

The gym floor at our North York club is always so busy in every positive way; people working out in their solitude and dedication, but also a lot of them are there to nurture their fitness routine while they hung out with their best friends. The span of generations is vast, and sometimes it’s a family thing too, but my favourite crowd I have to say is a group of regulars, all in their 70’s and 80’s. I love chatting with them every time, they just blow my mind how smart, jolly and fit they are! And then, it is such a multicultural community, where English sounds different from person to person, which makes this place so vibrant, cozy, homey, so Torontonian and just beautiful. I absolutely love spending time here and enjoy meeting new people, and some of their stories are simply breathtaking.

This is exactly how I ran into Paulo, who had just finished his CrossFit training for the day, and who had shared with me a few striking lines in that blitz meet-up, leaving me floored, and 100 % ready to beg for an interview. I knew I wanted the world to hear his inspiring journey, his personal story, I wanted all of you to hear it, so I took my chance. He looked over his soaking-wet T-shirt and said politely: “Maybe another time, I have to take a shower now.” He was kind enough to leave me his contact information and agreed to meet another day. I remain grateful for his time, for being so candid with some of the hardest and quite personal experiences, he left me inspired, and I know you will be too after watching this video.

A Runner with a sentence

No, it wasn’t CrossFit always, it was running actually. Paulo was a runner for decades. He started as a teenage boy back home in Portugal, following the steps of his older brother, the “talented one” how he likes to chuckle today remembering that time. As it usually happens with siblings, naturally Paulo wanted to be like his brother, so he took up running seriously, participated in over 300 different races, and set pretty remarkable Personal Records over the years. He ran some of the most prestigious marathons; obviously the one at home in Lisbon, but Boston and New York were on the list too. His marathon PR is 2hrs and 17 minutes, which is nothing short of impressive, and it is understandable when Paulo says that he just didn’t believe when he got diagnosed with leukemia in the middle of all of this.

Unfortunately, it was true. It was happening, and his life was in serious danger. I guess it’s a natural thing for human beings to feel this way when something so destructive and just unexpected happens, that common thought usually lingers; “This cannot happen to me.“ But it can. Anything can happen to anyone; it’s only a matter of how we decide to deal with it.  We tend not to believe it even when we are already going through it, and it’s usually some breaking point at which we learn to accept it.  For Paulo, it was the moment of having the bone marrow transplant done and his sister saving his life. Life as he knew it, stopped. He had no choice but to accept what was in front of him, he took it hour by hour, day by day, and from running races to learning to walk again, it was a long and hard way to recovery. But, he did it; different discipline, yet a winner once again.

From surviving cancer to CrossFit

That was 16 years ago. Life continued, and Paulo went back to running. Over the years, the new throwbacks came along, and new habits developed as a result of it. He’d still be running, but running would now typically follow the nights of partying and drinking until he finally ran into another bright moment of his life; a cross-fit girl whose passion and capabilities intrigued him so much so that he saw himself going for it. And for the girl too.

At first, he thought CrossFit was a joke until she put him on the spot, made him do a workout and left him suffering for days after. But it was the moment when he saw her competing, and when he experienced the atmosphere of everyone else working their hardest at one of the CrossFit Games when something clicked in him. He is training now at least 2 hrs a day every day, and maybe hoping to show up at one of those Games himself. As he says, he still has a lot to learn and to improve, but luckily he has his athlete girlfriend to coach him. 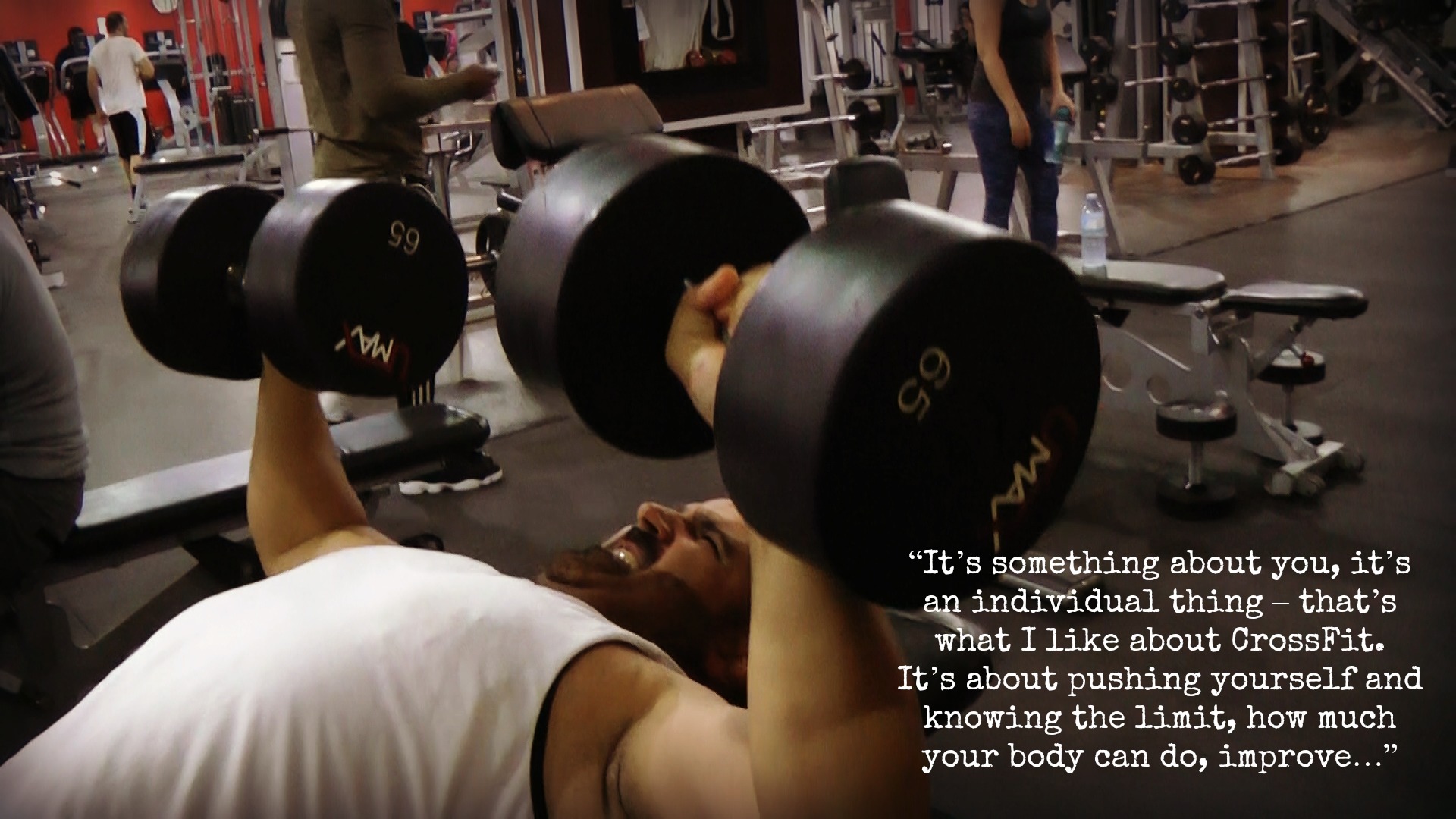 Coaching, having the right guidance and motivation is the key to see the results in any sport, and if you think you may need a helping hand towards your next fitness goal but aren’t as lucky as Paulo to have such a support system in place, our team of Personal Trainers can be your pathway.

This experience changed Paulo once again, to a better Paulo, to a Paulo who is living much healthier life now, who recognizes serious muscle gains which made him feel good and more confident. He stopped excessive drinking, he cares a whole lot more about what he eats and plans his meals as he plans his workouts. He learned something new, very enriching, but he weaved it into his established way of thinking and living; one day at a time with no expectations, accepting everything that comes his way.

What he discovered about CrossFit was that “it is almost like surviving cancer,” because it’s hard. Crossfit is hard. Surviving cancer, well, we don’t need to elaborate on that one. “It’s something about you, it’s an individual thing – that’s what I like about CrossFit. It’s about pushing yourself and knowing the limit, how much your body can do, improve…” – Paulo says.

Paulo doesn’t like to talk about the future; his preference is to focus on what’s right here in front of him. He is a doer who does not stop when it gets hard. However, I still think that somewhere, he is a dreamer too, and I think we’ll see him competing at some point. It’s the passion I recognized in him!

You become a doer when your dreams charge you up, and they may not be as clear as specific goals, they may not be on your mind every day, but they will be floating somewhere around you, sometimes showing up as hope, other times as feel-good energy. They’ll be revealed in the form of a wish, sometimes they’ll fly you up to a fairytale, and bring you down to your gut feelings. But it’s all gonna keep you doing, day in and day out until you realize one day that you are living your dream.  And on that journey, you may just inspire someone else, just like a CrossFit girl inspired Paulo, and Paulo inspired me to try for another marathon, and I am sure touched your hearts too.

Thank you Paulo, you got your fan base right here! We are cheering for you all the way.

For more inspiring stories, and crazy awesome healthy lifestyle tips, sign up with your email here and connect with us on our social media channels. Share this page with someone and perk up their day.