For whatever reason, the Russian Twist is an exercise that just won’t go away. Most people have seen it before, many people still perform this exercise in the gym, and you might even be performing it right now in your own program. What is the Russian Twist, well for those of you who haven’t seen this exercise it’s essentially sitting at the top of a “sit up position”, knees are bent and feet are off the ground, you hold a weight in front of your abs with bent elbows, and you proceed to twist from left to right (quickly), while maintaining the top of the “sit up” position.

Why? Because it’s though of as an exercise that effectively trains the obliques (the sides of your abs) as well as rotation throughout your core. While it does force the obliques to get a bit of a “burn” it’s doing a whole lot more of what you DON’T want.

What the Russian Twist actually does is place your spine (specifically your lower back) under a tremendous amount of flexion while the hip flexors to stay in a shortened position. Something most people are already doing too much through sitting all day long. Then, from there you’re putting your lower back through rotation, repeatedly, with a load (the weight in your hand) – this is a recipe for injury.

Your lower back has around (or less than) 5 degrees of rotational capability, you DO NOT want to rotate through your lower back. The areas that should be rotating during movements are your hips and thoracic spine. These areas save the lower back from having to rotate. When we rotate repeatedly through the lower back, we can begin to create tears in the discs that space the bones, or cause degeneration of the discs, which in many cases leads to serious pain.

Further more tight hip flexors and a rounded lower back, from sitting all day or training exercises like the Russian Twist, can lead to disc degeneration, disc bulges, or herniation of the discs in the lower back. Again, this leads to pain and possibly surgery – something you don’t want.

So, what’s a safer and far more effective exercise for training your core? 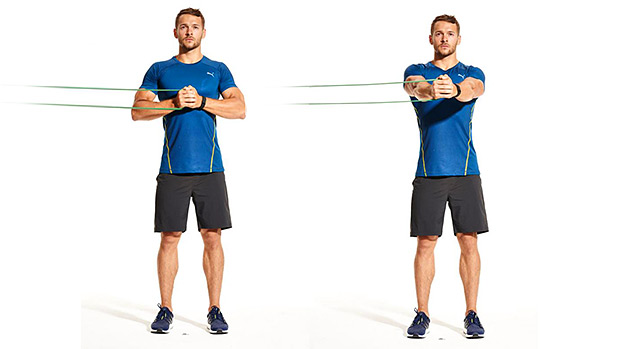 The Pallof Press is a fantastic way to train your core, if you know how to perform it correctly. As always, perfect form is a must if you want to train the exercise effectively and reduce the risk of injury. If you’re unsure of what you’re doing, and you need some help, please set up a meeting with anyone of our great Wynn Fitness Personal Trainers. They’ll be more than happy to help you train your core to a high degree!